Life In a Honeybee Colony

​In this section, you will learn about the natural behaviour of a colony of bees, the types of bees in a colony, the substances they collect, and how they swarm to form new colonies. It is the challenge of the beekeeper to work with this natural behaviour to produce honey, wax and thriving colonies of bees. 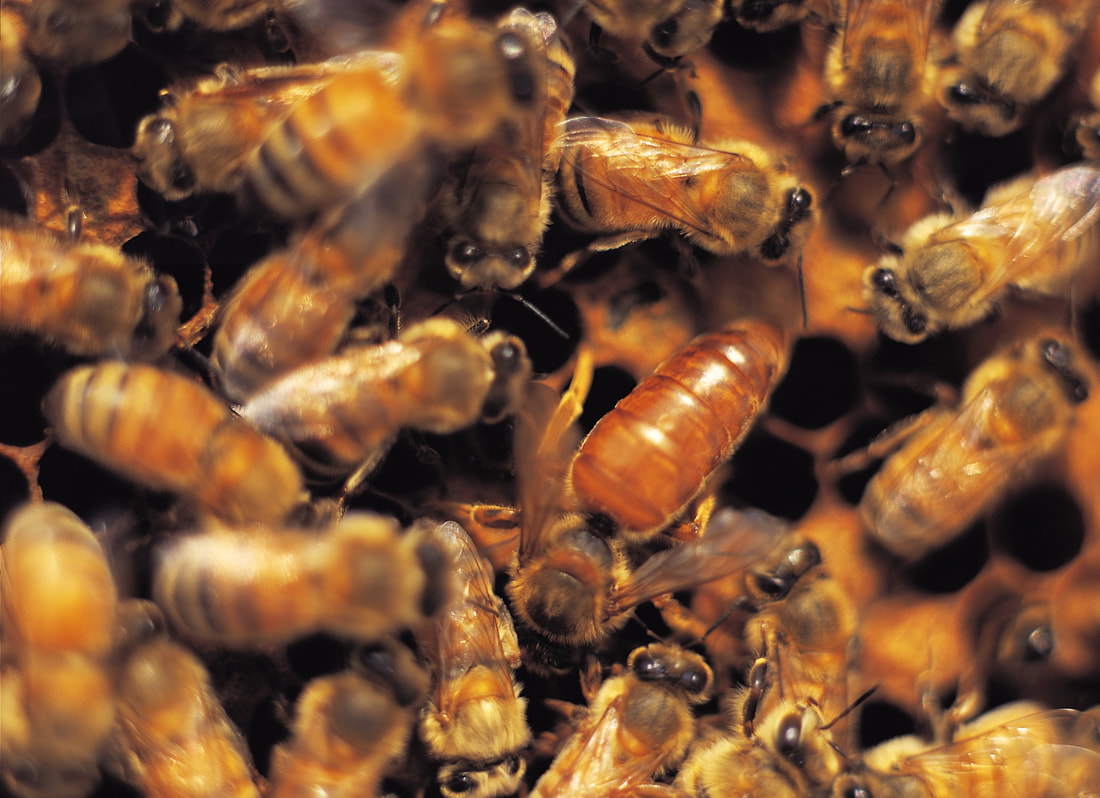 A queen bee surrounded by workers
​Much of the life within the hive tends to revolve around a single individual, the queen. Queen is rather a misnomer in fact, because she controls very little, the majority of colony activity being dictated by the workers. As the queen is the only individual in the hive who lays eggs, she is obviously very important. Her responsibility is restricted to egg laying, at which she is very efficient. At the height of the season, she lays more than her own weight of eggs every day. She spends her time locating empty cells, making sure they are clean and polished, then lowering her abdomen into the cells and depositing an egg in the bottom, positioned upright and central. Meanwhile she is attended by the workers, who feed and groom her.

The activity of honey bees is guided very much by pheromones, chemical signals to which the bees respond. One of the most powerful of these is the pheromone produced by the queen, which is known as 'queen substance'. This is taken from the queen in the course of grooming, and passed from bee to bee right around the colony, and has the effect of reducing the urge among the workers to build queen cells, and produce another queen.

The queen cell is unlike any other cell in the hive, in that it is acorn shaped, and is suspended vertically on the face of the comb. All of the other cells are hexagonal in shape and lie horizontally with a slight downward incline along their lengths to the bottom of the cell. The bottom of a cell on one side of the comb is centred on the junction of the walls of three cells on the other side of the comb. This forms a very strong and rigid structure and is used throughout the hive, not only for the raising of brood, but also for the storage of honey and pollen. There are also two different sizes of hexagonal cell, one being for the raising of worker bees, and slightly larger ones for the production of drones.

Drone cells drawn out at the bottom of the comb - notice the much more pronounced caps
The Drones are the males of the species. Their sole purpose in life is to mate with virgin queens. They carry out no other duties within the hive, and they are not equipped to go out foraging, so much of their time is spent resting and eating.

On warm sunny days, they may leave the hive and meet up with drones from other colonies in areas known as 'Drone Congregation Areas'. When a virgin queen goes out on her mating flight, she will locate one of these areas, and having attracted the drones, will spiral upwards and mate on the wing with several of the strongest drones. These matings result in the death of the drones, as their genitals are torn from them in the course of copulation. The semen which the queen receives, is stored in her body, and will last her entire life in the fertilization of her eggs.

The drones, whilst being essential for this purpose, are a tremendous drain on a colony's resources. They are large insects with large appetites, and whilst this can be tolerated in times of plenty, as the season progresses towards winter and the forage becomes scarcer, winter stores must be contemplated, and the presence of drones can no longer be supported. They are therefore ejected from the hive and their re-entry barred, where they will perish, without the support of the colony.

One of the interesting features of the drone is its heritage. When the queen lays an egg in a worker cell, she will use some of the male sperm stored in her body to fertilize it. The egg will hatch into a female bee - a worker, but when she lays an egg in a drone cell, she will not fertilize it, and the egg will hatch into a male bee - a drone. Therefore, a drone has a grandfather, but not a father. 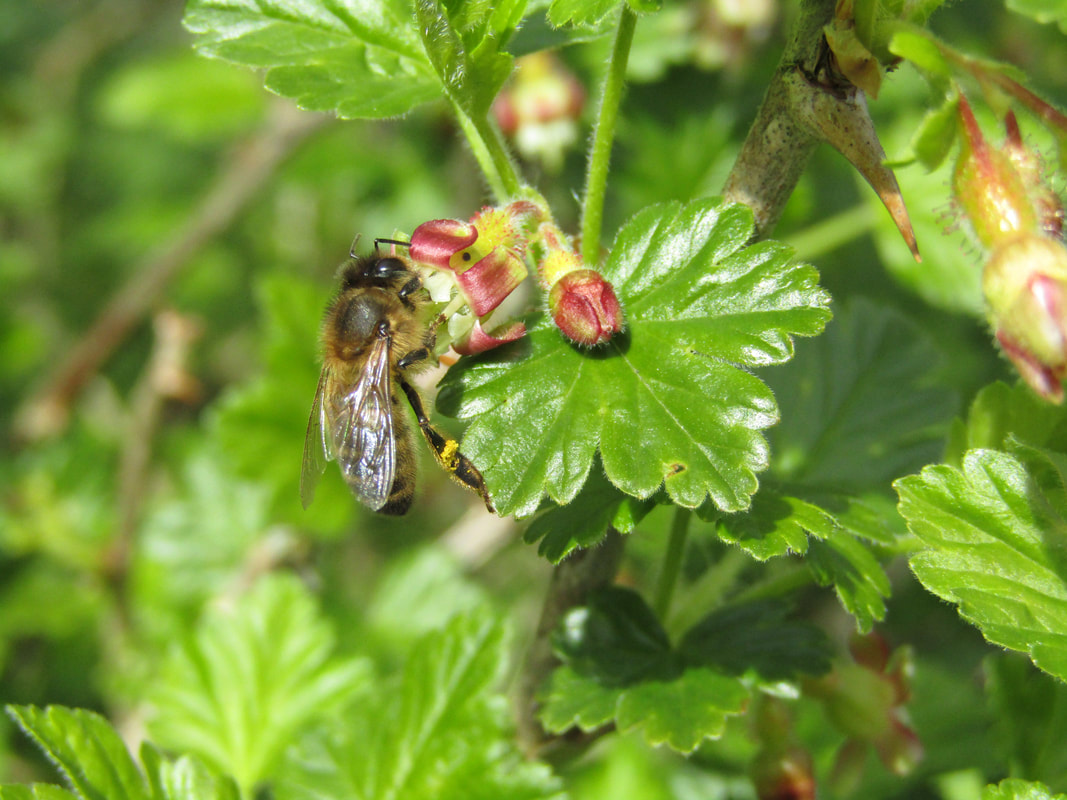 A worker bee collecting pollen
​Most of the eggs laid by the queen will be in worker cells. The egg will take three days to hatch into a larva, which will then be fed constantly by adult workers, growing at a rapid rate until it fills the cell. At this point the cell is capped over by the worker bees, and within the sealed cell, the larva will go through several stages of pupation, and will eventually emerge as an adult insect.

It will adopt various responsibilities as it develops. Its first labours will involve cleaning and polishing cells, in readiness for the next generation. After a few days, its brood food glands develop, and it is able to take on responsibility for feeding the brood. Later its venom glands develop, and it is able to take its turn as a guard at the entrance to the hive, repelling unwanted visitors with its sting. Finally it will become a fully fledged forager, leaving the hive, and returning with loads of nectar, pollen, propolis or water.

​Nectar is the raw material of honey, which provides the bees with their carbohydrate. It is a rich sugar solution collected from the nectaries of flowers, and transported by means of the bee's crop, a sort of storage tank within the body of the worker bee.

Pollen is the protein side of the bees diet, and is, again, collected from flowers. The pollen grains cling to the hairs on the bees' body during its visit to the flower. The bee then uses combs on its legs to rake the pollen grains from its body. The pollen is then moistened with saliva, and packed onto the pollen baskets on the two rear legs, and transported back to the hive.

Propolis is a sticky resinous substance produced by many trees and shrubs. Horse chestnut buds in Spring is a typical example. The bees collect this material and use it to stick up any cracks and crevices in their hive. When it is considered that the natural home of a honey bee is a hollow tree, there are obviously many cracks and crevices which require sealing and proofing against the weather.

Water is carried in the bees' crops, and transported in copious quantities, particularly during hot weather. As well as being used to dilute concentrated honey, it is also used to control the temperature within the hive. As the temperature rises, droplets of water are suspended in cells, and heat loss is obtained through evaporation. 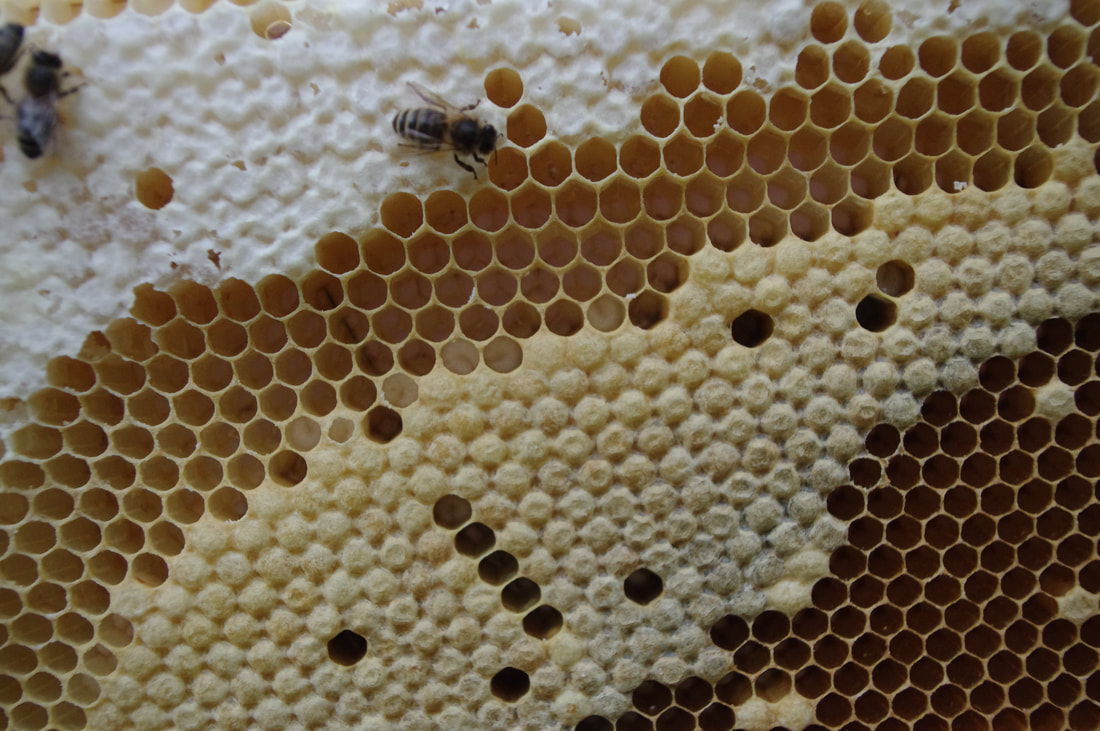 A section of brood comb with sealed honey on the outside, then larvae, sealed brood and finally eggs in the middle
​The brood nest is usually formed in the shape of a globe, and when the beekeeper examines individual frames, it is like drawing out a cross section of the globe. Most of the globe is filled with brood in various stages of development. Outside of this is a layer of stored pollen which is used in the feeding of larvae. Outside of this is the stored honey. The bees will always make sure that there is ample honey stores close to the brood area, but as the availability of nectar increases, a surplus is produced, and that is when the storage space above the brood nest is required, and the honey supers are utilized. 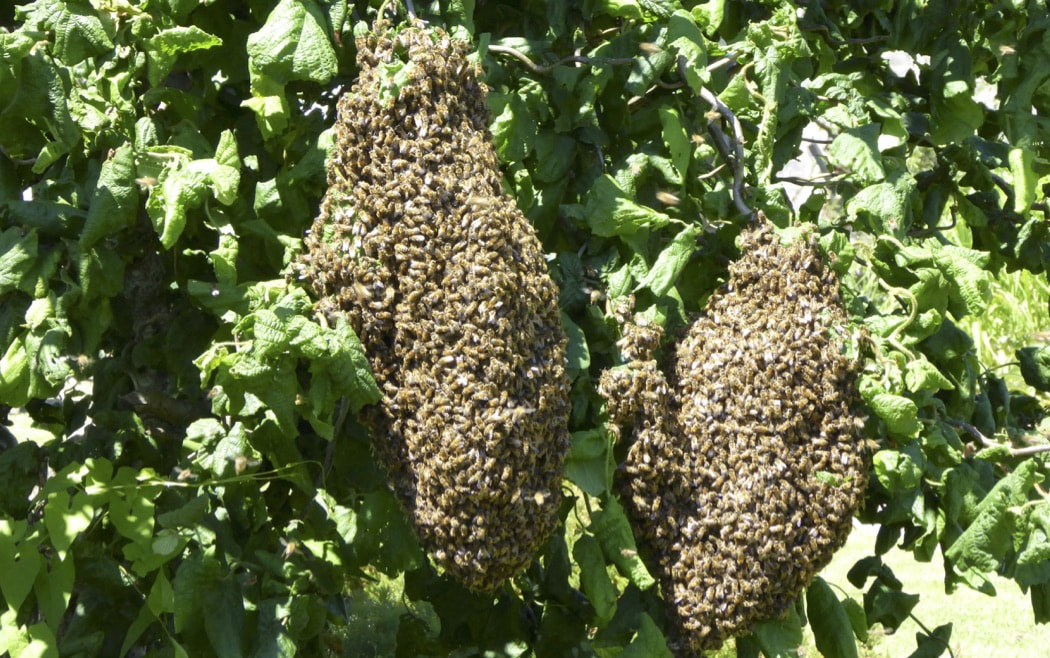 ​One cannot talk about life within the hive without mentioning swarming. Swarming is a spectacular event in the life of a colony. It is the bees' natural way of reproduction, when one colony divides into two or more, and go their separate ways.The impulse is triggered by several sets of circumstances. If the queen is getting elderly and not producing sufficient 'queen substance' to circulate the colony, queen cells will be formed. If the population gets so large that not all bees are receiving 'queen substance', again, queen cells will be formed. If there is an imbalance in the ratio of house-bound nurse bees to out-bound foragers, the hive will become congested and this will also lead to swarming.

The first physical signs of swarming, is the appearance of the acorn shaped cells hanging down around the periphery of the brood comb. The egg which the queen will deposit in this cell, will be exactly the same as the egg deposited in a worker cell. The grub which hatches will be exactly the same. The treatment of the larvae which follow, however, will be different.

For three days, the worker larva will be fed royal jelly, a rich brood food secreted from the glands of young adult worker bees. Worker bee larvae are then weaned onto a less nutritious brood food. The queen larva, on the other hand, is fed royal jelly for the whole of its larval life, and in copious quantities.It actually floats on a sea of nutrition. It is this diet that determines the difference between the two castes. The worker bee will emerge as a female insect, but with under developed ovaries,a barbed sting, glands which will produce brood food and the bodily requirements for foraging. The emerging queen, on the other hand, will have none of these foraging attributes, but she will have perfectly developed ovaries, and will be a much larger, stronger insect.

When the bees are making preparation to swarm, there may be up to 20 or 30 queen cells produced. As soon as the larva in the first queen cell is fully developed, and the cell is capped over, it is then that the swarm issues. Roughly half of the bees in all stages of adult development, together with the old queen, will emerge from the hive and form the familiar cluster hanging from a tree or shrub. They will stay in this situation while scouts locate a suitable site to make their new home. This could be a hollow tree, or a church roof, a chimney or a cavity in a wall. Hopefully, if the beekeeper is alert, it will be back into an empty hive.

Back in the old hive, the first virgin queen will emerge from her sealed cell. Her first action will be to go around locating the other queen cells, and kill her rivals before they have chance to emerge. If this does not happen then secondary swarms, known as casts, will emerge, and the colony will be greatly weakened. Eventually, the new queen will fly out on her mating flight or flights, take up her laying responsibility, and become the new mother of the colony.