No matter how careful we are when siting an apiary, the time inevitably comes when it would be beneficial to have the hives somewhere else. Circumstances change, and what was originally the perfect position, now presents problems, or there is a harvestable crop in the next village worthy of exploitation, or there is a pollination contract worth securing, or we simply want to obtain an unusual type of honey, such as heather, which necessitates moving hives to the moors. Whatever the reason, moving bees is a comparatively simple operation as long as certain rules are observed.
​
The most fundamental of these is the 3 feet or 3 mile rule. A hive can be moved up to 3 feet from its original site, and the bees will still be able to find it, but more than this, and we run the risk of the flying bees returning to the old site and getting lost. If it is necessary to move the hive more than 3 feet, then it should be moved at least 3 miles away, left for three weeks, then returned to its new location. By moving 3 miles, the flying bees will not attempt to find their old site, but will relocate to the new one. After three weeks, most of the original flying bees will have died, to be replaced by a new work force, so when the hive is returned to the vicinity of the old site, there will be very few bees that can remember it, and normal relocation will take place.

Winter would appear to be a good time to move bees, as there is very little flying going on, but in fact, it is a very dangerous time. Once the bees have formed their winter cluster, any disturbance could result in the cluster breaking up. This would result in their inability to maintain cluster temperature, and would lead to many deaths, and perhaps the total loss of the colony. The best time to move bees is during the active season. Moving hives during the active season however, can be very heavy work, particularly if there is a lot of honey on the hive, so there is a great advantage in having two pairs of hands available to tackle the job. Even then, the hive should not consist of more than a brood chamber and two supers. Anything over this, and it is not just a question of weight, but also the sheer size becomes difficult to transport. A brood chamber and a single super is much easier, but of course the space required by the bees needs to be taken into account. If it is a very strong colony, then a second super might be necessary just to give them sufficient room. Of course, the hive can be made lighter by removing full frames of honey, and replacing them with empty combs or foundation.

Such manipulations and preparations for moving should be carried out during the day, and the actual move, will take place in the evening, when all the flying bees have returned to the hive. During the day, all the hive joints should be checked for gaps, which would allow the bees to leak out during transportation. When the bees are shut in, with the entrance closed, a great deal of heat can be developed by a strong colony, therefore adequate ventilation needs to be considered. This usually takes the form of a Travelling Screen, which is a sheet of wire mesh surrounded by a wooden frame. This takes the place of the crownboard, and allows ventilation over the whole area of the hive. Once this is in place, then the hive must be secured against shifting or slipping components, which would inevitably allow leakage. The easiest way of achieving this is by the use of a Hive Strap. This is simply a strong nylon strap with a tensioning buckle at one end. The strap is passed under the floorboard, and up around the brood chamber and supers, to be secured with the buckle on top of the travelling screen. This is best done from side to side, rather than front to back, thus allowing easy access to the entrance, for closing up in the evening. The crownboard can then be placed loosely on top of this, just to help retain the temperature in the hive until it is time to move, and then the roof replaced.

When the evening arrives, and the bees have stopped flying, it is a simple task to block up the entrance with a strip of foam rubber, remove the roof and crownboard, and the hive is ready for moving. Unfortunately however, beekeeping is not always that straightforward. There are times on a balmy summer evening, when the bees simply will not stop flying, or because the temperature is high inside the hive, they form a cluster outside, around the entrance. On these occasions, if the roof and crownboard are removed, exposing the travelling screen, this will have the effect of reducing the temperature within the hive, and usually results in any clustering bees moving back inside. Gentle smoking is sometimes successful, but great care should be taken, as excessive smoke will cause the bees to scatter in all directions, and getting them inside is then even more difficult. Patience is indeed a virtue.
​ 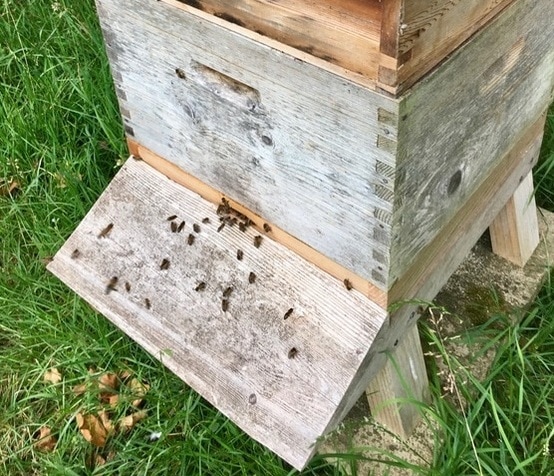 Once the bees are secured within the hive, it can be loaded into the vehicle, and transported to it’s new home, or temporary home. When loading a single walled hive, such as a National, Commercial or Langstroth, the hive will sit in the upturned roof on top of the crownboard, thereby keeping all the components together, and making the best use of the available space. If a long journey is contemplated, then a water spray should be taken along, so that periodically, water can be sprayed over the travelling screen, which will assist the bees in controlling their temperature.

On reaching the destination, care must be taken to put the hive down in its correct position, as once the bees are released, further movement becomes difficult. Once in position, the hive strap can be removed, and the crownboard and roof replaced. (It is easier to remove the travelling screen at a later time, when the bees have settled down). The entrance strip is then removed, and the bees begin the ritual of reorientation