​The emergence of a swarm usually proclaims the failure of the beekeeper’s swarm prevention measures, and is generally viewed with disappointment, yet retrieval of the swarm is one of the most satisfying exercises of the craft. On emerging, the swarm will usually settle on the branch of a tree, or a bush, within a hundred yards of the parent hive. The bees form a tight cluster, and hang in an elliptical shaped ball. This is a transitional position, which gives them the opportunity to regroup and ensure that their queen is with them, before moving off to take up permanent residence in their selected new home. If the queen for some reason does not join them, then they will all return to the hive from whence they came.

This is unusual however. The queen usually emerges with the swarm and lands on the tree or bush along with the rest of the bees. In this transitional position, they now have to make decisions concerning where to go. Potential sites will have been investigated some days before the emergence, so there are usually several options. The scout bees will now investigate these options further, and report back to the swarm, communicating by dancing just as they do when passing on information on pollen or nectar sources. The vitality of the dance reflects the suitability of the site, and the bees will react to the most enthusiastic dance, and eventually take off for that location. If the beekeeper is to retrieve the swarm, they must be taken before this occurs.

The swarm can be taken in any container large enough to hold them. Traditionally, a straw skep is used, but this could just as easily be a wooden or cardboard box, or even a bucket. The container is placed under the swarm, and raised so that as much of the swarm as possible is hanging inside. With one hand holding the container, and getting ready to receive the weight of the swarm, the other hand is used to vigorously shake the branch to which the bees are clinging. The swarm will fall into the waiting container, which can then be quickly inverted over a sheet, which was spread on the ground in preparation. A small stone or stick should be placed under one side of the container, allowing the bees an entrance. The bees will come tumbling out of this entrance, but if the queen is successfully inside, they will very quickly turn around and begin “fanning”, exposing the Nasanov gland at the tip of their abdomen and releasing a homing pheromone, which will direct the flying bees back to their queen. If the queen is not inside, then all the bees will return to the swarming position, and the operation will have to be repeated.

Of course, the bees do not always decide to swarm onto a convenient tree or shrub. Sometimes they will choose a solid object, which cannot be shaken, such as a wall or a gatepost. In these instances, the sheet should be spread under the swarm, and the bees brushed into the container using a soft bee brush.

When the swarm is safely in the container, and it has been determined that the queen is present by the fanning of the bees, it should be left in place to receive all the flying bees of the swarm. If it can be afforded some shade from the sun, it is beneficial, then in the evening, when flying has finished for the day, the sheet on which the container is sitting, can be drawn up enclosing the container, securing the bees within. They can then be removed and hived. 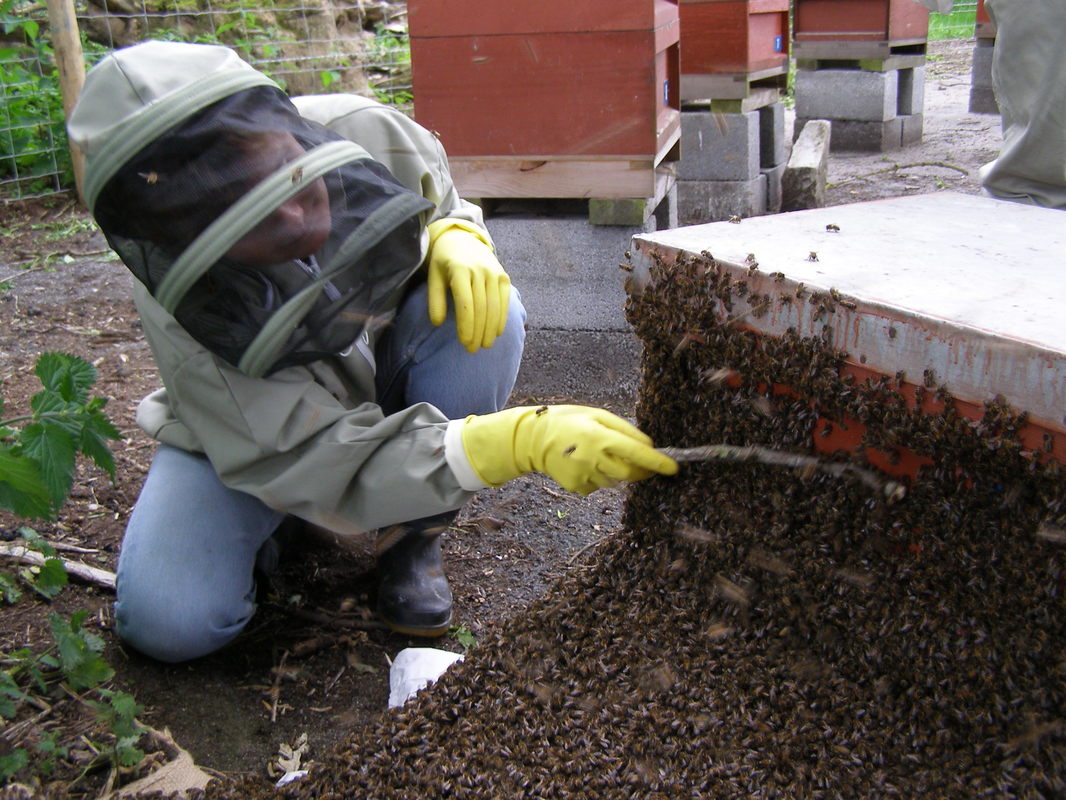 The hive to receive the swarm can be prepared in advance. A single brood chamber will usually suffice, although in exceptional circumstances, a super can be added. The bees will accept drawn comb more readily than new foundation, and even if there are only a couple of drawn combs available, these should be used, filling up the remaining space with foundation. Any entrance block should be removed, and a temporary ramp placed from the ground to the entrance of the hive.

When the swarm is collected and brought to the hive, the container can be placed on the ramp, and the securing sheet undone and draped over the ramp. The container can then be lifted and the bees shaken on to the ramp, when they will quickly run up into the hive. Sometimes, if watched carefully, the queen can be seen running over the backs of the workers, and in through the entrance. For the beekeeper, it is a most satisfying moment, and no matter how long one has been beekeeping, it is an experience which never fails to thrill.

As in most things to do with honeybees however, nothing is certain, and the fact that they have gone into the hive does not necessarily mean that they will stay there. It is not unknown for them to reject the accommodation the next day and either regroup on a branch, or fly off to where they were headed before the interruption. This is where a couple of drawn combs are to be preferred to a hive full of new foundation. Prime swarms are not usually a problem, but casts, with new young queens, are notoriously skittish. A sure-fire way of keeping them in place however is to give them a frame of very young brood taken from another hive. This is irresistible to worker bees, to be presented with hungry young larvae that need feeding, and almost always results in the swarm taking up residence.

If the source of the swarm is unknown, then the bees should be watched for signs of disease. Some beekeepers keep an isolation apiary, where swarms are kept while ensuring their health. It is not usual to find a problem, but care is usually rewarded. One of the problems, which is always worth treating for, is the varroa mite. There is never a better opportunity of control, than on a swarm. All the mites are on the bees; there is no brood where the mites can hide, so if treated, a hundred per cent eradication can be achieved.

If it is known from which hive the swarm emerged, then a very simple manipulation can utilise the swarm to the best advantage of the beekeeper. This manipulation is carried out prior to the swarm being hived. The hive from which the swarm emerged is moved to a new location some feet away. The hive to receive the swarm is put in it’s place, with the supers from the original hive, together with adhering bees, put over a queen excluder on this new hive. The swarm can now be run into it as described earlier. The flying bees from the original hive will go out to forage as usual, but on return, because they are accustomed to the original site, they will enter the new hive and join the swarm. This will result in a highly productive colony, with no brood to feed until the queen starts laying again, therefore nothing to do but store honey. Meanwhile, in the original colony with it’s queen cells, all the flying bees have disappeared, leaving the colony weakened to a state when they are unlikely to cast, therefore they can be left alone to raise their new queen. This can then become a new colony for the beekeeper, if growth is required, or united with the swarm, at a later date, utilising the new queen.